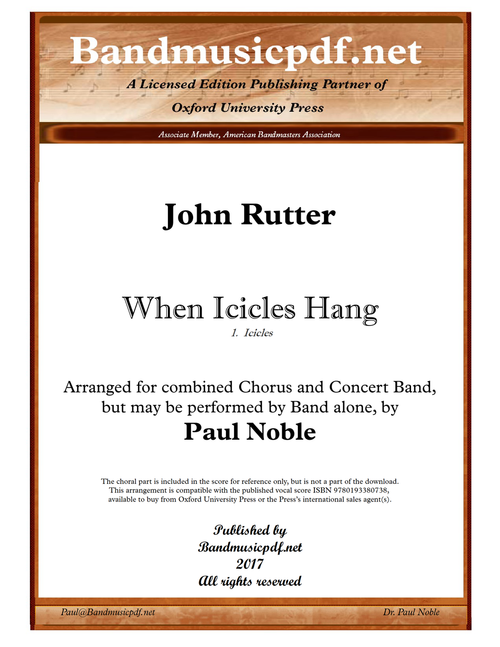 John Rutter received an early commission for a piece of music that was "seasonal" for winter, though not necessarily linked to the Christian traditions of Christmas, in the early '70s. The request came from his friend Russell Burgess, a well-known conductor in the English musical scene and head of the Wandsworth School Boys' Choir through the '60s and '70s. Rutter responded with a six-movement work for orchestra, boys' choir, and mixed chorus, called When Icicles Hang. He chose his texts, characteristically, from Elizabethan and other early English poetry, each text dealing with images from the wintery season, be they the cold, ice-bound landscape and its winds; an older man's weariness in the face of the season; or the contrapuntal pleasures of ale and "honey love" for those safely inside on winter nights.

The movements are: I. Icicles; II. Winter Nights; III Good Ale; IV Blow, blow, thou winter winds; V. Winter wakeneth all my care; VI. Hay, ay.With sparkling orchestration which has been faithfully set for Concert/Wind Band, the work may be performed with chorus as originally written, or may be performed effectively by band alone. The work is available as a complete set of six movements, or each movement may be purchased and performed individually.