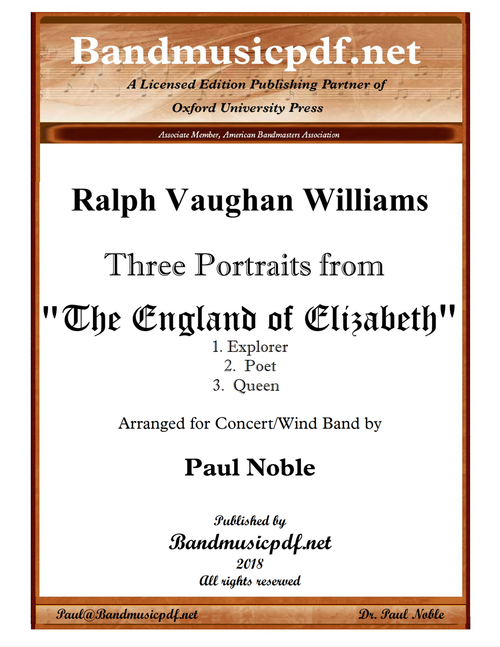 This suite was derived from Vaughan Williams' score for the film, The England of Elizabeth, written in 1955. It was the composer's tenth of his 11 cinematic efforts and designed to serve a more descriptive role than other such scores, since the movie was a documentary featuring no action scenes, but lots of images of paintings, buildings, and the like. Composer Muir Matheson adapted this three-movement suite, probably shortly after the composer's death in 1958, though publication of the manuscript would not come until 1964. The first movement is entitled "Explorer," and refers to Sir Francis Drake. Its music is mostly festive and colorful, but features interior passages of exotic flavor, similar in style to that of Vaughan Williams' then-recent Symphony No. 8. The second movement is entitled "Poet" and, at about seven minutes, is the longest of the three in this 16- to 17-minute work. It also contains probably the score's best music, hardly a surprising result since the poet in question is Shakespeare, one of the composer's favorites and an inspirational springboard for so many other of his works. The mood is mostly subdued and Vaughan Williams presents lovely, if slightly somber music in the opening, and follows it with a hearty, folk-like dance tune. The latter part of this movement depicts Shakespeare as a noble, heroic figure in English history. The last movement, "Queen," is devoted to Queen Elizabeth. It has a regal yet muscular manner at the outset, and features a gentle but somewhat disengaged middle section. It returns to the splendor and color of the opening to close the work. This suite is important because it distills some of the best music from the film into a logically assembled structure.

Program notes extracted from those of Robert Cummings.