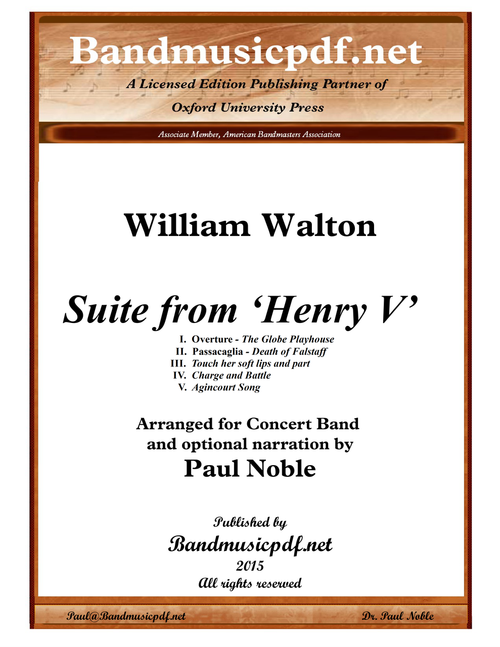 The Suite from Henry V is an arrangement for Concert Band and optional narrator, adapted from the 1963 orchestral arrangement of William Walton's musical score from the 1944 film Henry V. The suite, originally arranged for orchestra by Muir Mathieson, is in five movements, and occupies a very significant role in the history of music and of Shakespearean studies. Performances exist in a variety of formats because the adaptation of the narration to a film suite is subject to choice. To be chronologically correct, the order of movements from the original suite has been altered to adhere to the narration of the play. And the choice of speeches has required considerable research by classicists who are familiar with the writings of Shakespeare. It has been the endeavour of this arranger to research and present this suite in as authentic a manner as possible, understanding that it might well become the standard by which Concert Bands of the future will adapt and present this music. The arranger is indebted to Anna Warren, a resident of Twickenham and a graduate in Modern Languages (French and Italian) and History from the University of Bristol and a postgraduate from The Institute of Education, the University of London, for her knowledge and insight into the formation of the narration.

Toccata, from Symphony No. 5