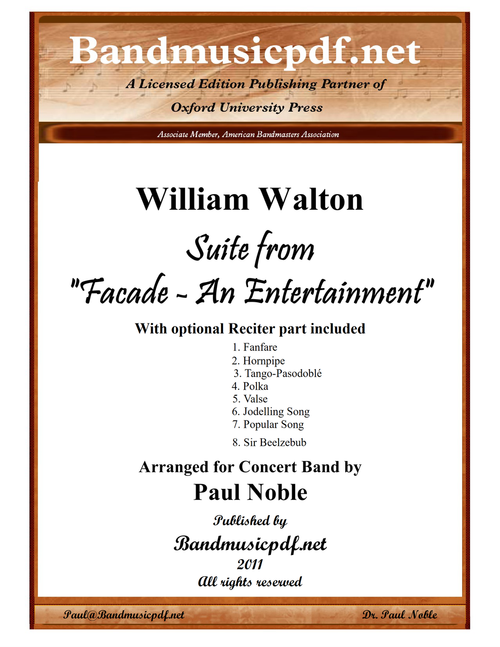 This “Suite from Façade - An Entertainment,” composed by William Walton, with poems by Dame Edith Sitwell, presents for the first time a grouping of movements selected and arranged by Paul Noble for Concert Band and optional Reciter. The original composition was written between 1921 and 1928, containing forty-three numbers. They had their origin in a new style of poetry that Edith Sitwell evolved in the early 1920s, poems that her brother Osbert later described as ‘experiments in obtaining through the medium of words the rhythm and dance measures such as waltzes, polkas, foxtrots . . . Some of the resulting poems were sad and serious. . . Others were mocking and gay. . . All possessed a quite extraordinary and haunting fascination.’   Possibly influenced by the dance references in some of the numbers, Osbert declared that the poems might be further enhanced if spoken to a musical accompaniment. The obvious choice of composer was the young man who lived and worked in an attic room of the Sitwell brothers’ house in Carlyle Square W[illiam] T[urner] Walton, as he then styled himself. The now historic first performance of the Façade Entertainment took place in an L-shaped first-floor drawing-room on January 24, 1922. Accompaniments to sixteen poems and two short musical numbers were performed by an ensemble of five players. The performers were obscured from the audience by a decorated front curtain, through which a megaphone protruded for Edith to declaim her poems. This was, as she put it, ‘to deprive the work of any personal quality’.

The first public performance of Façade was given at the Aeolian Hall on June 12, 1923. By now, fourteen poems had been set, others revised or rejected, and an alto saxophone added to the ensemble. The occasion gave rise to widespread publicity, both pro and contra, and the name of the twenty-one year old W. T. Walton was truly launched.

In the ensuing years the Façade has gone through revisions and additions, with full orchestral arrangements of selected movements being made without the Reciter. Former Band Director Robert O’Brien arranged some movements for band, again without Reciter, which are now out of print. So this ‘history making’ addition is the first opportunity for Concert Bands to present some movements of Façade with poems as originally intended. The luxury of electronic amplification allows the full ensemble to perform without necessarily overshadowing the Reciter. And the arrangements are written with considerable doubling so that the ensemble may play in full, or reduced in size as may be desired for proper balance. And, though not encouraged, the arrangements are written so that the band can perform the music without the Reciter.

Program notes are adapted in part from those written by David Lloyd-Jones and published by Oxford University Press in the Study Score of William Walton's Façade Entertainments.