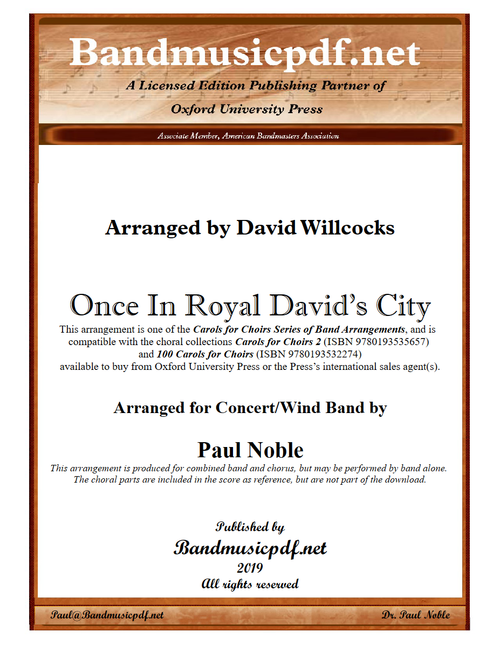 Once in Royal David's City is a Christmas carol originally written as a poem by Cecil Frances Alexander. The carol was first published in 1848 in her hymnbook Hymns for Little Children. A year later, the English organist Henry John Gauntlett discovered the poem and set it to music. According to The New Oxford Book of Carols, the text was conceived by Cecil Alexander“after overhearing a group of her godchildren complaining about the dreariness of the catechism.” Cecil masterfully took doctrines from the Apostle’s Creed and simplified them for her hymns. Cecil wrote about 400 hymns in her lifetime, among which are All things bright and beautiful and There Is a Green Hill Far Away. She used the money for charitable purposes, and was a tireless advocate (and visitor) of the poor and sick.

Henry John Gauntlett had spent the first half of his career as a lawyer before abandoning his practice to pursue music. He served as the organist at a number of leading London churches. Gauntlett was a prolific writer and is said to have composed over 1000 hymn tunes. He made tremendous contributions to the world of music, even inventing mechanical improvements to the organ. As a result, he was praised by the famous Felix Mendelssohn and was awarded an honorary doctorate in music from the Archbishop of Canterbury. In 1919, Arthur Henry Mann, organist at King’s College (1876-1929), introduced an arrangement of “Once in Royal David’s City” as the processional hymn for the service. In his version, the first stanza is sung unaccompanied by a boy chorister. The choir and then the congregation join in with the organ on succeeding stanzas. This has been the tradition ever since. It is a great honor to be the boy chosen to sing the opening solo—a voice heard literally around the world. In this arrangement for band accompaniment, the first five verses may be performed as directed by the conductor, with different groupings of instruments for each verse, i.e., Vs.1, A cappella; Vs. 2, Fl., Oboe, E.H., Bsns; Vs. 3 Cl., Saxes; Vs. 4, Brass; Vs. 5, All, and Vs. 6 as written with featured descant. This arrangement is one of the Series of Band Arrangements compatible with the David Willcocks Carols for Choir, Book 2 (#31).

Cityscapes 3. Flower of Cities All