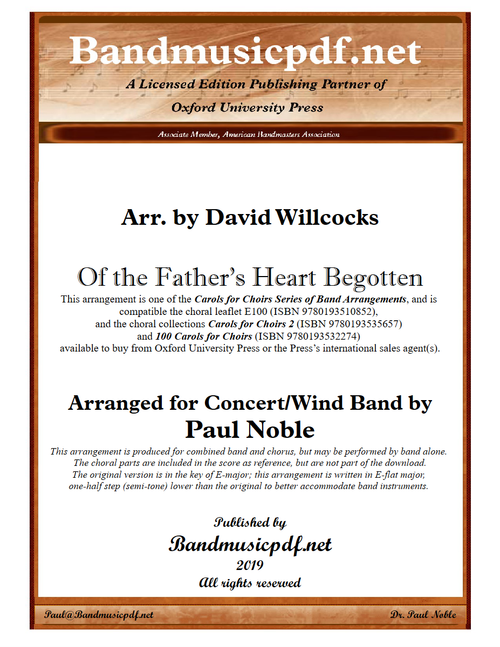 Of the Father's Heart Begotten alternatively known as Of the Father's Love Begotten is a doctrinal hymn based on the Latin poem 'Corde natus' by the Roman poet Aurelius Prudentius. The ancient poem was translated and paired with a medieval plainchant melody Divinum mysterium. Divinum mysterium was a "Sanctus trope" - an ancient plainchant melody which over the years had been musically embellished. An early version of this chant appears in manuscript form as early as the 10th century, although without the melodic additions, and "trope" versions with various melodic differences appear in Italian, German, Gallacian, Bohemian and Spanish manuscripts dating from the 13th to 16th centuries. Dissatisfied with an earlier translation, Roby Furley Davis (1866–1937), a scholar at St. John's College, Cambridge, wrote a new version for the English Hymnal of 1906. This version was also used in the popular Carols for Choirs series by David Willcocks. This arrangement represents one in the Series of Band Arrangements compatible with David Willcocks' Carols for Choirs.