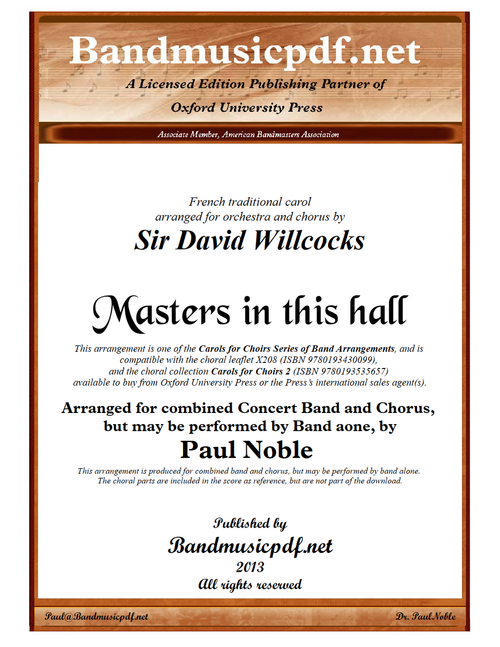 Masters in This Hall (alternative title: "Nowell, Sing We Clear") is a Christmas carol with words written around 1860 by the English poet and artist William Morris to an old French dance tune. It is said to have a sixteenth-century feel, harking back to a simpler society, in line with Morris's own romanticism. It also has elements of Morris's socialist beliefs, with the poor bringing news of Christ's birth to the "Masters in this Hall" and a warning to the proud. The carol describes a poor man, emphasized by his rural dialect, drawing his master's attention to the birth of Christ by describing how he had met shepherds travelling to Bethlehem in solemn mood where, joining them, he had seen the Christ child in his mother's arms. The chorus repeats how the birth of Christ has raised up the poor and cast down the proud. This represents one of the Series of Band Arrangements compatible with David Willcocks' Carols for Choirs.

The Gift of Life 3. Hymn to the Creator of Light