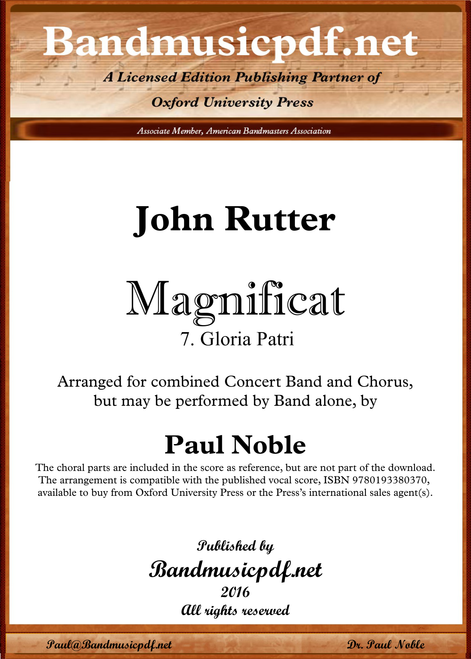 Gloria Patri (Glory be to the Father) is the seventh and final movement of the Magnificat. The music is based on movement 3, repeating the dotted rhythm and the building from bass to two sopranos. A prayer addressing Mary interrupts the doxology: Sancta Maria, asking "for support of humanity, including the needy, the timid, the clergy, women, and the laity". It is sung by the soloist over sustained chords. The final Sicut erat in principio (As it was in the beginning), repeats, as often, material from the very beginning of the work, the initial Magnificat motif, and the descending lines ending on a mordent on Amen. Rutter was inspired by "jubilant celebrations of Mary in Hispanic cultures" and conceived the work as a "bright Latin-flavoured fiesta". In countries such as Spain, Mexico and Puerto Rico, feast days of the Virgin are joyous opportunities to take to the streets and celebrate with singing, dancing and processions. This arrangement for combined Concert Band and Chorus may also be performed by band alone.