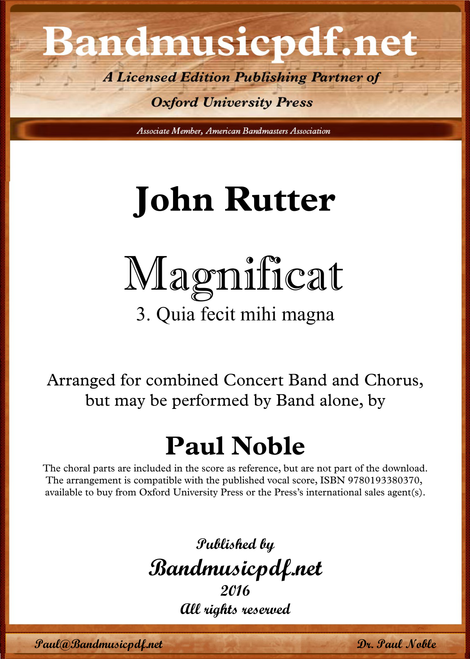 Quia fecit mihi magna, (For he [that is mighty] hath done to me great things), is the third of seven movements comprising John Rutter’s setting of the biblical canticle Magnificat, completed in 1990. Rutter was inspired by "jubilant celebrations of Mary in Hispanic cultures" and conceived the work as a "bright Latin-flavoured fiesta". In countries such as Spain, Mexico and Puerto Rico, feast days of the Virgin are joyous opportunities to take to the streets and celebrate with singing, dancing and processions. The movement concentrates on two ideas from the canticle verse. Marked "Andante maestoso", the choral movement opens with solemn dotted rhythms. The second idea of the verse, Et sanctum nomen eius (And holy is his name), builds similarly. The movement is closed by a chant-like accompanied Sanctus, taken from the Missa cum jubilo. This arrangement for combined Concert Band and Chorus may also be performed by band alone, and is a faithful representation of the original composition.