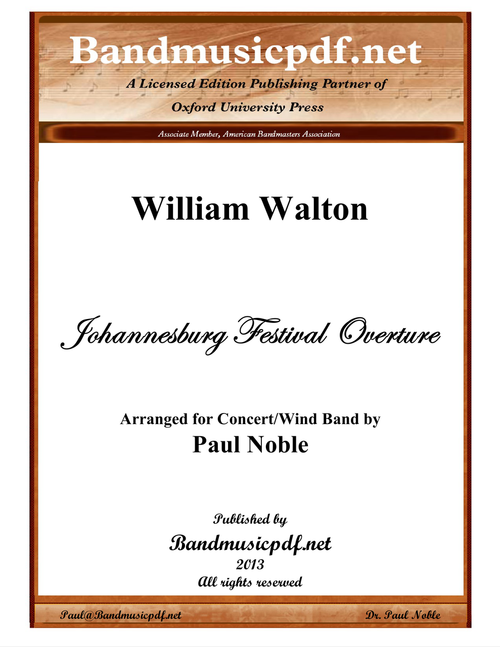 Johannesburg Festival Overture was composed for orchestra by William Walton for the 70th anniversary of Johannesburg, South Africa in 1956. Walton received the commission from Ernest Fleischmann, musical director of the Johannesburg Festival Committee, to celebrate the seventieth anniversary of the city. Fleischmann included in his request to “include some African themes”. For inspiration he requested recordings of African music from the African Music Society. The effect of these recordings can be heard with percussionists performing on eleven instruments. The composer also incorporated the main theme from Jean Bosco Mwenda’s "Masanga" (which had been released on record in 1954). An interesting use of this original material can be heard on: http://www.youtube.com/watch?v=pvsP9i0xovs. Walton described the piece to his publisher as “a non-stop gallop...slightly crazy, hilarious and vulgar”. This arrangement for Concert Band captures the original color, excitement, and energy of the original orchestra work, and should become a staple in the repertoire of excellent bands.

Joy to the World