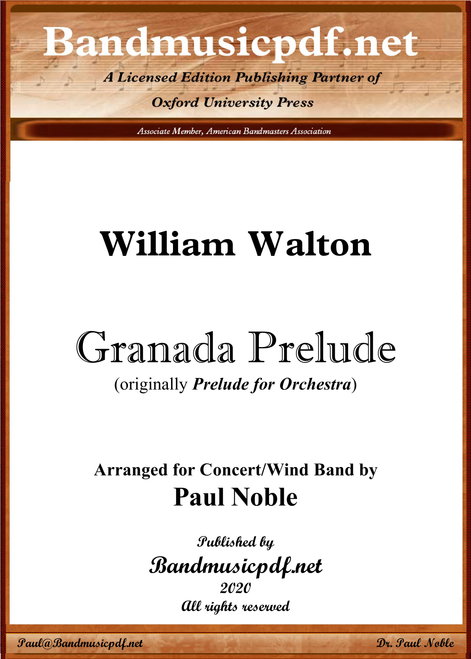 The circumstances surrounding the composition of the "Granada" Prelude make it, quite paradoxically, one of the most obscure pieces in William Walton's catalogue and the most often heard. It was commissioned by the Granada Television Corporation in 1961, which needed background music to accompany broadcast materials. While Walton's original score for the prelude was never used by Granada, the music of the prelude, in a version rescored by Gilbert Vintner for symphonic wind ensemble and retitled March for Concert Band, was heard on the Granada channel at the beginning of each broadcast day from the mid 1960s until 1973. Although he composed nothing new for the Silver Jubilee of Elizabeth II in 1977, Walton did release for public performance his original orchestral version of the Prelude for Orchestra. This first performance was on Saturday 25 June 1977, with James Blair conducting the Young Musicians’ Symphony Orchestra in St. John's, Smith Square, London. This arrangement for  Concert/Wind Band is based on Walton's original orchestral score. There are striking similarities with Walton's "big tunes," similar to ones found in Crown Imperial, Orb and Sceptre, and Spitfire Prelude, also arranged for band by Paul Noble.