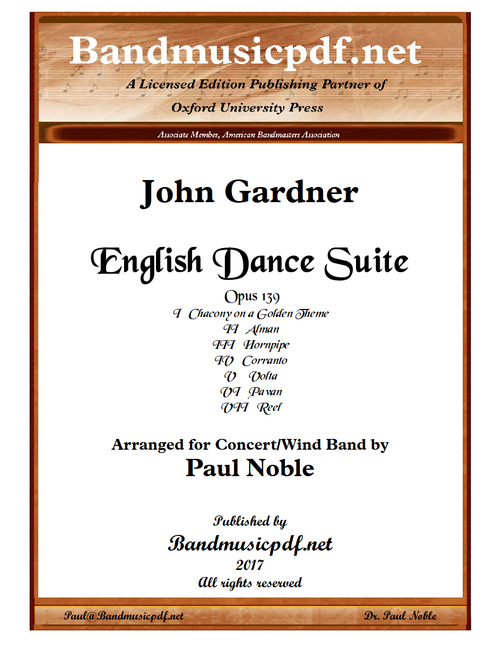 Arranged for the modern Concert/Wind Band, scored for three trumpets, reasonable doubling of parts where the original musical effect is not altered so that players can have a more responsible and enjoyable experience, more legible parts with less doubling on one staff, etc. The piece is offered either as a complete suite of seven movements, and also as seven individual movements which may be purchased independently.

The English Dance Suite was originally composed by John Gardner for Wind Band, and has been re-set for the modern Concert Band instrumentation. Both the original version, edited and type-set by Paul Noble, and this arrangement are first editions now available for purchase to bands around the world. The set of seven Renaissance dances depict John Gardner's love of Scottish music, the Renaissance heritage, and some of his own mischievous approach to music. The first movement, Chacony on a Golden Theme, reminiscent of the Allegro movement of Purcell's Golden Sonata, is much used as a vehicle for variation on a repeated short harmonic progression, often involving a fairly short repetitive bass-line which offered a compositional outline for variation, decoration, figuration and melodic invention. In this it closely resembles the passacaglia. The Alman originated in the 16th century as a duple metere dance of moderate tempo, already considered very old, with a characteristic "double-knocking" upbeat of one or occasionally three sixteenth notes. It appears to have derived from a German dance but no identifiable dance and no German dance instructions from this era survive. The Hornpipe, usually in 3/2 dance rhythm, is an Irish, Scottish and English dance. It is done in hard shoes, which are used to help keep track of how the dancer keeps in time. There are two variations of the hornpipe dance: fast and slow. Usually, more experienced dancers will do the slow hornpipe but younger dancers will start out with the fast hornpipe and then switch in later years. The Corranto is a 16th-century court dance characterized by short advances and retreats, in quick triple time. The Volta (Italian: "the turn" or "turning") is an anglicised name from the later Renaissance. Its main figure consisted of a turn and lift in a sort of closed position. The Pavan is a slow processional dance common in Europe during the 16th century. The Reel, indigenous to Scotland, consists largely of quaver (eighth note) movement with an accent on the first and third beats of the bar.

English Dance Suite - I Chacony on a Golden Theme

Legend of the Lake, Complete