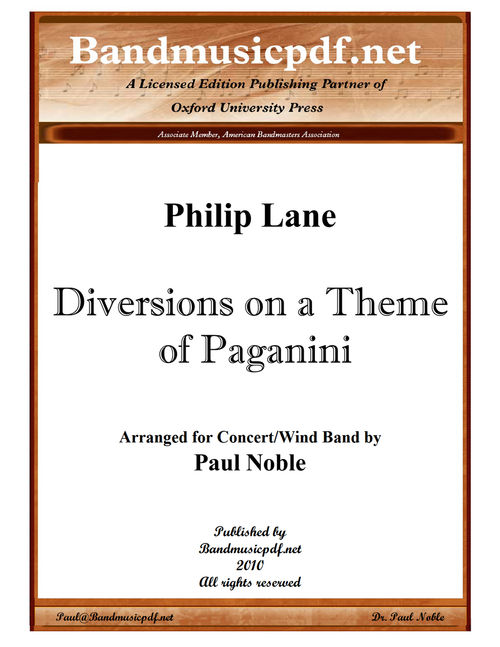 This work is made up of eight short movements and was originally scored for brass quintet, being commissioned for performance by the LondonGabrieli Ensemble. The full orchestra version was made in 2000 for a commercial recording by the Royal Ballet Sinfonia conducted by Gavin Sutherland, and the band arrangement was completed in 2009. The title is important in that the pieces are more musings than variations on the famous theme. The introduction stands somewhat apart, rather in the way the opening of Dohnanyi’s “Variations on a Nursery Tune” does, and the subsequent diversions play with the theme, or parts of it, in movements lyrical, bombastic, or plain frivolous. The individual titles of the movements are self-explanatory, except to add that the last one always reminds the composer, for some reason, of final credits going up at the end of a film or television programme.Titles of the eight movements: 1. Introduction and Theme; 2. In Pieces; 3. Toccata; 4. Chaconne; 5. Cortege; 6. Popular Song;7. Five-A-Side; 8. Epilogue. This piece will be a great workout for your band, with lots of opportunities for soloists, some rhythmic challenges, and great emotional stretches.