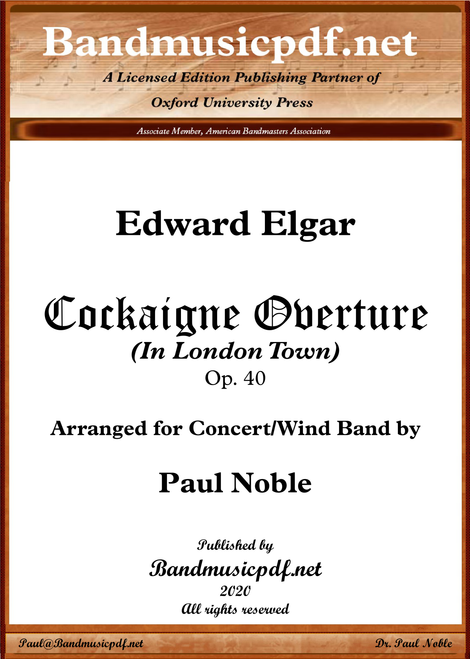 Cockaigne Overture was composed when Edward Elgar received a commission from the Royal Philharmonic Society, and he reported that the new piece was "cheerful and Londony, 'stout and steaky'...honest, healthy, humorous and strong, but not vulgar." The first performance was in the Queen's Hall, London, on 20 June 1901, conducted by the composer. He dedicated the work to his "many friends, the members of British orchestras."  The music was an immediate success and became one of Elgar's most popular works. In its 15 minutes or so, the overture gives a lively and colourful musical portrait of Edwardian London. 'Cockaigne' was a term used by moralists at that time as a metaphor for gluttony and drunkenness, while
Britain adopted the name humorously for London, and from it we get the Cockney. Cockaigne or Cockayne /ka' kein/, the word origin tracing back to the 13th century, is a land of plenty in medieval myth, an imaginary place of extreme luxury and ease where physical comforts and pleasures are always immediately at hand and where the harshness of medieval peasant life does not exist. The work presents various aspects of turn-of-the-century London and Londoners. It begins with a quiet but bustling theme which leads into an unbroken sequence of snapshots: the cockneys, the church bells, the romantic couples, a slightly ragged brass band (perhaps the Salvation Army) and a contrastingly grand and imperious military band. The broad
theme representing Londoners has been stated as the first occurrence of Elgar’s trademark direction, 'nobilmente.' The work ends in a characteristically Elgarian blaze of sound, including an optional full organ.