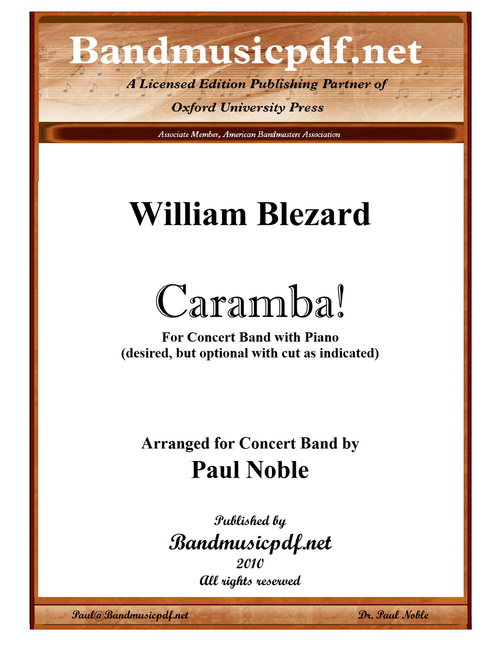 William Blezard began writing "Caramba!" during a tour of New Zealand. Yet the musical basis of this work is about as far away from Kiwi culture as one can get. The word 'Caramba' has several translations from the Spanish, including "Dear Me!", or "Goodness Me!", or perhaps more colloquially, "Golly", or even "Holy cow!". The entire work has an exotic feel to it that is so suggestive of things Spanish or Latin American. This is helped by the extensive use of percussion, and of course the brass is pure Latin American dance style. The demanding piano part is featured as almost a 'concertante'. In the Concert Band arrangement, the piano is highly desirable to replicate the original score, but the arrangement includes enough doubling and a short cut to make the piece entirely playable without the piano. "Caramba!" has all the hallmarks of a great piece of concert music that pleases as well as excites. For bands that want a challenge that is sure to bring an audience to its feet, "Caramba!" is the piece!