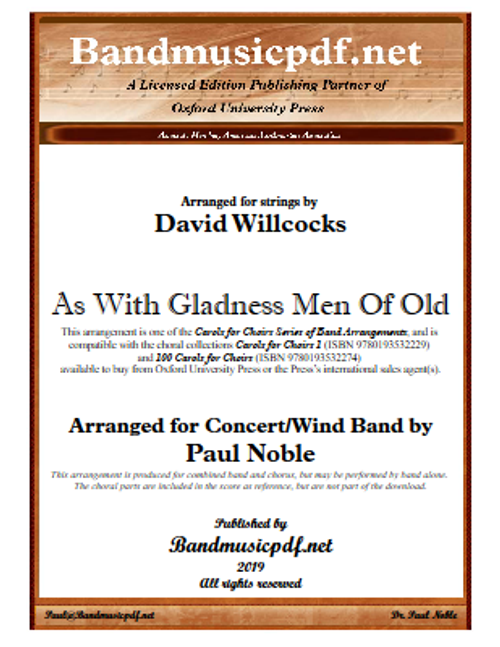 As with Gladness Men of Old is an Epiphany hymn, written by William Chatterton Dix on 6 January 1859 (Epiphany) while he was ill in bed. Though considered by many as a Christmas carol, it is found in the Epiphany section of many hymnals and still used by many churches. The music was adapted by William Henry Monk in 1861 from a tune written by Conrad Kocher in 1838. The hymn is based on the visit of the Biblical magi in the Nativity of Jesus. The hymn used Matthew 2:1–12 as a theme to compare the journey of the Biblical magi to visit the baby Jesus to each Christian's personal pilgrimage and as a reminder that it is not the value of the gifts, it is the value of giving and adoration to Jesus that is what Christians should seek. It is the only well-known Epiphany hymn or carol about the Biblical magi that avoids referring to them as either "magi" or "kings" and does not state how many there were. This arrangement represents one in the Series of Band Arrangements compatible with David Willcocks' Carols for Choirs.