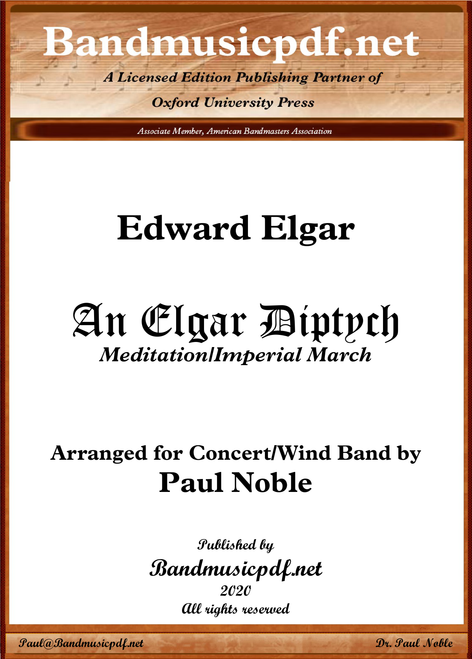 A message from Paul Noble:
Although the title is mine, the idea and inspiration came from a musician and scholar whose invited remarks are included below. Regarding the arrangement, the original organ and harp parts are included, but are otherwise covered so that these instruments may be considered as optional. PN
*************************
"An Elgar Diptych brings together two independent and contrasting works composed by Elgar as he stood on the brink of national fame.  Meditation, with its self-explanatory title, forms the first movement of his oratorio, The Light of Life Op 29, which was premiered at the Worcester Festival of 1896. In the years that followed Meditation became a popular item on its own and Elgar as conductor recorded it in 1925.
"His Imperial March Op 32 (composed to celebrate Queen Victoria’s Diamond Jubilee) received its premiere at a Crystal Palace concert in 1897, the year after The Light of Life. The march quickly caught the mood of British national rejoicing and gave Elgar important recognition. Paired together in publication, these two works make a satisfying contrast and may be programmed as such or independently for concert use. Additionally, they would be suitable for either religious or ceremonial use."
© Tom Higgins August 2020
www.tomhigginsconductor.co.uk