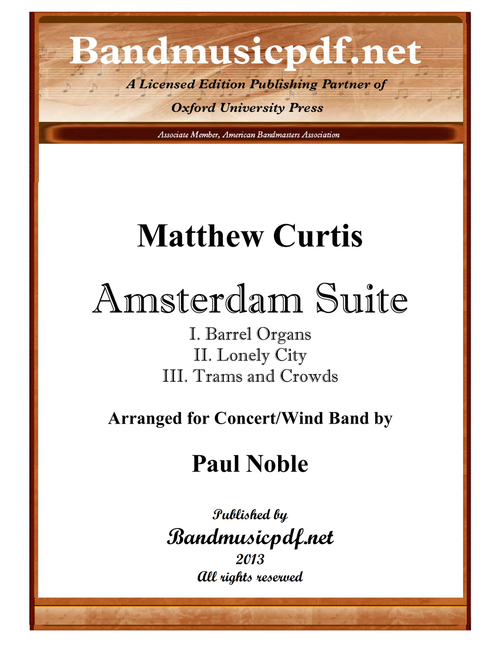 “The Amsterdam Suite, written in 1995 and first performed by the Slaithwaite Philharmonic Orchestra the following year, seeks to convey some impressions of a city I have visited several times. It opens with the waltz sequence Barrel Organs, recalling the hurdy-gurdies positioned at strategic points in the city with the aim of parting tourists with their loose change. The tunes, however, are mine rather than an attempt to reproduce the real thing.

“Amsterdam takes its Saturday nights seriously, with the result that those who get up (or are still up) early on Sunday morning will find themselves in eerily deserted streets, whose atmosphere to me suggests one instrument above all – the saxophone – which plays a prominent part in Lonely City.

“The Saturday nights themselves are depicted in Trams and Crowds. I have taken liberties with the chronology for the obvious musical reason of wanting to go out with a bang rather than a whimper. The basic structure is very much that used by Eric Coates for similar pieces – a bustling outer section with a quick march trio, presented in a fuller and more embellished orchestration on each of its three appearances.” Matthew Curtis