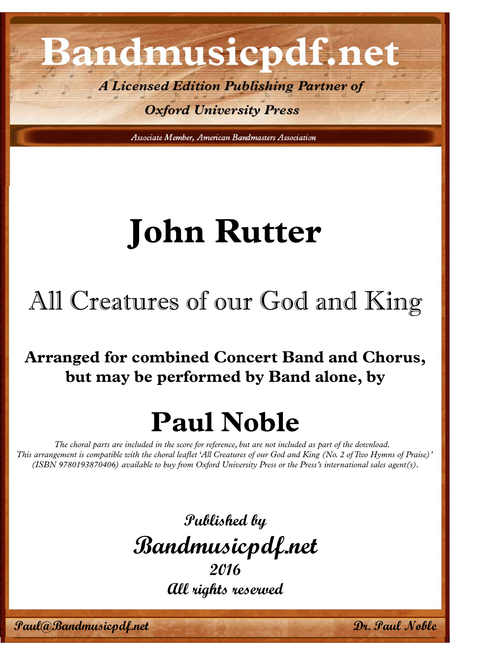 Paul Noble - Bandmusicpdf.net · All Creatures of our God and King

All Creatures of Our God and King is an English Christian Easter hymn by William Henry Draper, based on a poem by St. Francis of Assisi. It was first published in a hymn book in 1919. The words of the hymn were initially written by St. Francis of Assisi in 1225 in the Canticle of the Sun poem, which was based on Psalm 148. The words were translated into English by William Draper, who at the time was rector of a Church of England parish church at Adel near Leeds. Draper paraphrased the words of the Canticle and set them to music. It is not known when Draper first wrote the hymn but it was between 1899 and 1919. The hymn is currently used in 179 different hymn books. The words written by St Francis are some of the oldest used in hymns after "Father We Praise Thee", written in 580 AD. Like "Ye Watchers and Ye Holy Ones", Draper's text is usually set to the tune of "Lasst uns erfreuen", a German Easter hymn published by Friedrich Spee in 1623 in his book Auserlesene Catholische Geistliche Kirchengesäng.

This tune became widespread in English hymn books starting with a 1906 arrangement by Ralph Vaughan Williams. John Rutter also wrote a piece of music for the hymn. Despite the hymn being initially written by Draper for Whitsun (the Anglican and English designation for Pentecost), it is mostly used in the ealier weeks of the Easter season.

This setting by John Rutter begins with a rousing fanfare for trumpets and trombone, which segues in to the first verse of the hymn. There are seven verses included, but the director has the option of deleting verses as desired.

Now thank we all our God

O God, our help in ages past

A CHILD'S GARDEN OF VERSES