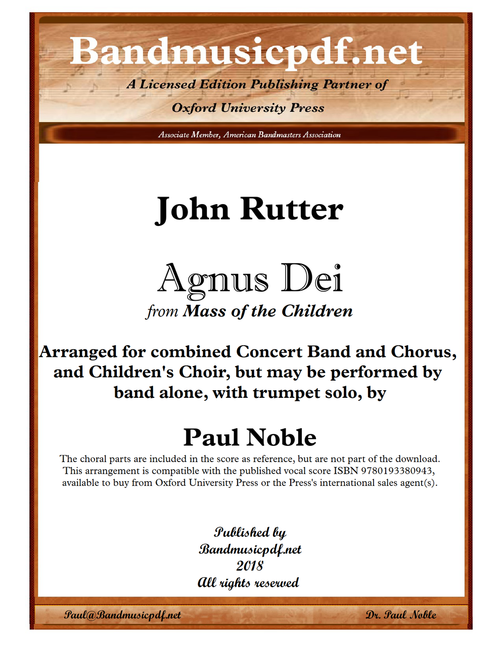 Mass of the Children represents something new in the composer’s work insofar as it was conceived with an integral role for a children’s choir alongside an adult mixed choir, two soloists, and orchestra (now band). The role of the children’s choir is to add a further dimension to the traditional Latin Mass sung by the adult choir, sometimes commenting, sometimes amplifying the meaning and mood. The arranger will present the entire five movements of the Mass of the Children, and also each of the movements individually. However, he was particularly moved during this time in history to relate to the serious plight of our children, with immigrant separations from parents to school shootings and beyond. The William Blake (1757-1827) poem, The Lamb, featured in this movement, became a significant choice for this message. As with so many of John Rutter's compositions, words are only a part of the focal point. His musical understanding, sense of melody, harmony and orchestration are oftentimes fully capable of telling the story even without the text.

In the setting for band alone, the children's choir part is set for solo trumpet, and the darker beginning (Agnus Dei, miserere nobis) is further enhanced by muted brass and the pulsating heart-beat of the bass drum, felt, but rarely heard.
The tragic deaths that occurred on February 14, 2018 at Stoneman Douglas High School in Parkland, Florida have touched the lives of so many people that the arranger is privileged to have the support of both John Rutter and Oxford University Press in the dedication of this piece to the
students of Stoneman Douglas High School Bands. The deaths are marked by 17 tollings by the chimes.

Kyrie, from Mass of the Children

Finale, from Mass of the Children

Down by the riverside

Kyrie, from Mass of the Children