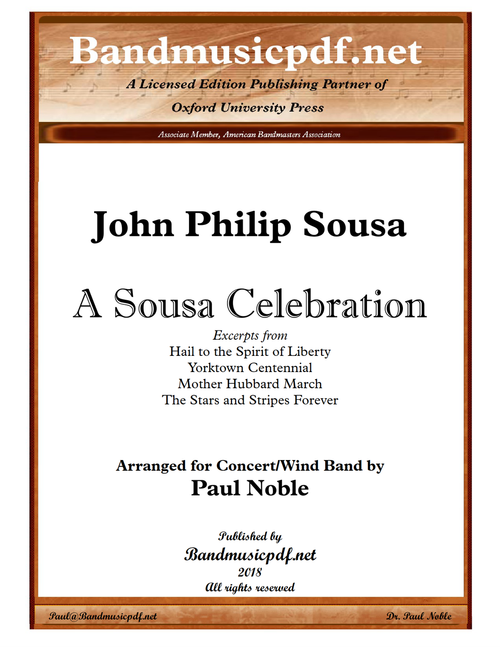 A Sousa Celebration is the arranger's collection of excerpts from several of Sousa's interesting marches, creating a patriotic presentation of greater length than the typical march. This selection includes a variety of content, offering a showpiece to several sections of the band: Hail to the Spirit of Liberty, composed for the Paris Exposition of 1900, for the unveiling of the Lafayette Monument on July 4;Yorktown Centennial (1881), written to commemorate the hundredth anniversary of the last important battle of the Revolutionary War: the surrender at Yorktown;Mother Hubbard March (1885), based on nursery rhymes; "Three Blind Mice," "Thus the Farmer Sows His Seed," "Old Mother Hubbard," "Hey Diddle Diddle," "Little Redbird in the Tree," "London Bridge is Falling Down," "Scotland the Brave," and "The Minstrel Boy." The celebration concludes with excerpts from Sousa's most celebrated march,The Stars and Stripes Forever.