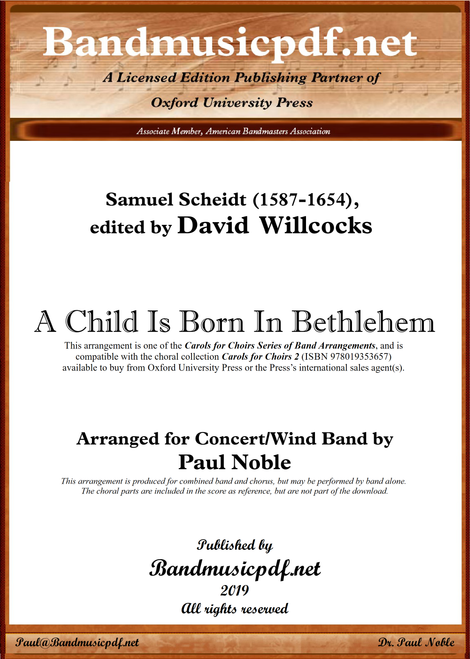 Paul Noble - Bandmusicpdf.net · A Child Is Born In Bethlehem

Samuel Scheidt (1587 - 1654) was a German composer, organist and teacher of the early Baroque era, and was one of Germany's most distinguished composers at that time, especially in the field of keyboard music. His three volumes of Tabulatura nova(1624) are a monumental compendium of song and dance arrangements, sets of variations, fantasias, toccatas, fugues and liturgical pieces (often plainsong-based) for the Lutheran Mass and Office. Likewise his four books of Geistliche Konzerte illustrate the ways of elaborating a chorale, fusing declamatory ideas with contrapuntal writing. Scheidt was the first internationally significant German composer for the organ, and represents the flowering of the new north German style, which occurred largely as a result of the Protestant Reformation. Scheidt's music is in two principal categories: instrumental music, including a large amount of keyboard music, mostly for organ; and sacred vocal music, some of which is a cappella and some of which uses a basso continuo or other instrumental accompaniment.